Volez Voguez Voyager is an exhibit you may have heard of by now. It opened October 27, 2017 and will remain open until January 7, 2017. What you may have missed if you have gone (and will be sure not to if still planning on going) are some of the clothing items that helped to serve as the backdrop to some amazing early luggage pieces and the relationship between changing transportation methods and changing garments. This post will highlight some of the relationship occurring between clothing and travel for women between 1880-1930. It’s important to note that these clothing pieces are pre-inclusion of clothing under the Louis Vuitton label. This didn’t happen until many years later, in 1997, when Marc Jacobs was tasked with initiating both a men’s and women’s label for the brand as its first creative director.

Louis Vuitton (1835-1892), founded his namesake brand in 1854, in Paris. He initially created travel trunks which were strong yet relatively light. Vuitton’s usage of canvas material and unique patterns added desirability to his designs, even before the now-famous monogram design which was added in 1896. 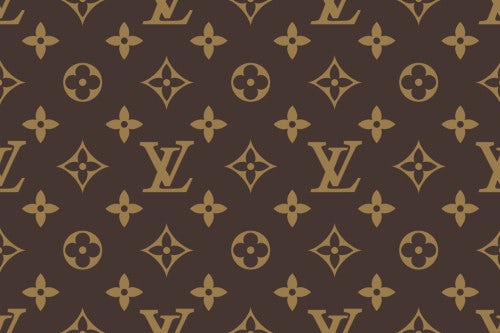 In 1893, a year after Louis Vuitton had passed, his son Georges brought the brand’s products to the Chicago World’s Fair. There he met John Wanamaker of Wanamaker’s Department Stores, one of the first department stores in the United States. From this connection, Louis Vuitton products would be sold in the United States for the first time in 1898 through Wanamaker’s, and has continued to be sold in the U.S. ever since. 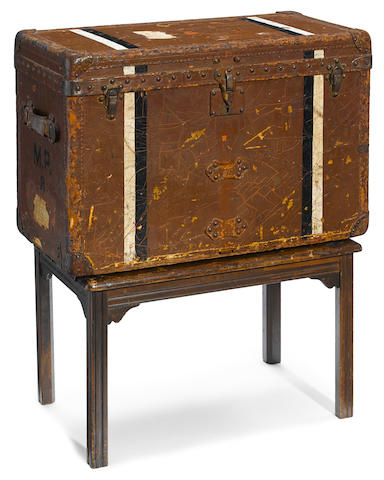 Many elite travelers were taken with the brand. Above is an example of an LV trunk used by original Hollywood royalty, Mary Pickford.

One of the earlier trunks shown in the exhibition was “A Lady’s Low Trunk in Striped Canvas” from 1886. Made of the typical coated canvas, wood, leather, and brass, this low trunk answered the need for ladies to lay their long garments relatively flat, and to bring enough garments for a long stay. This trunk was really a classic shape and method of packing items for many years. The skirt shown here likely would have been worn bustled in keeping with the fashionable silhouette of the second bustle period.  Also important to keep in mind, the duration of a trip overseas or otherwise far from home in the late 19th century would typically last for many weeks or even months as it took many hours by boat or train. Travel for pleasure, while certainly in existence, was still on the cusp of a revolution.

An example of a wardrobe trunk, ca. 1914, shows how trunks, clothing, and travel were beginning to change.  The trunk is a modification of the classic low trunk and is able to hang garments upright. I personally love the parallels between the upright, vertical shape of this trunk and the dresses that were becoming slimmer, and more vertically oriented in the early 1900s (although it’s important to note that this style of trunk was introduced around the mid 1870s). Travel would become relatively easier for women from a physical, garment perspective, as skirts without a bustle (the second bustle period ending around the late 1880’s) would make it easier to sit comfortably for long periods of time.

Remarking on the incredible evolution of travel during this period, the wall text of the exhibition reads:

In the nineteenth century, the evolution of transportation reduced distances. Steam vessels were put into service in the 1830s, linking Europe to America. Railways in 1848, the invention of the automobile in the 1890s, and the advent of commercial airlines in the 1900s ushered the world towards new habits and life experiences. […] Clothing was adapted to the new modes of travel. Suits, coats, and overalls in neutral tones kept company with the tastemakers of the time.”

As transportation methods and frequency evolved, so did clothing. Not only did styles change as a result of new tastes and preferences throughout the years, but entirely new garments were created as well. Tailors and pattern makers were happy to supply new garments for women like these duster coats shown below.

These late 19th century dusters were originally meant to keep a traveler’s clothing from gathering dust from the road. They were most often worn in an open car, as traveling along a dirt road in this method could certainly dirty one’s clothes, but might be worn for train travel or other methods as well.

This trunk for air travel represents another major innovation — airplanes. The museum wall text boasts of this trunk:

The Aéro trunk could hold ‘2 pieces of clothing, 1 overcoat, 10 shirts, 3 nightgowns, 3 pairs of underwear, 3 waistcoats, 6 pairs of socks, 12 handkerchiefs, 1 pair of shoes, 18 detachable collars, gloves, ties, and hats’ all weighing less than 57 pounds. Its dimensions were identical to the Aviette, a more feminine version.

Of course, not a major contender in terms of convenient travel that it is today, but the need for a light trunk as this time foreshadowed the quickening pace of travel to come. Louis Vuitton understood that consumers needed a bag that could meet their needs for packing as many items as possible, but without needing many hired hands to carry it. Even the word we associate with a bag for travel would evolve from trunk to suitcase – a case (much smaller than a heavy trunk) for suits.

I think it’s important to bring these early relationships between travel and clothing to the forefront as it underscores the many unprecedented changes that were happening at the turn of the century. How might your clothing for train travel differ from riding in a carriage by horse? What kind of luggage would you need and what would that look like? These are the kinds of questions that came to my mind and hopefully this post has either answered some of these, or spurred additional questions of the kind for you!

One thought on “Did You Miss this in the Louis Vuitton Exhibition, Volez Voguez Voyager?”