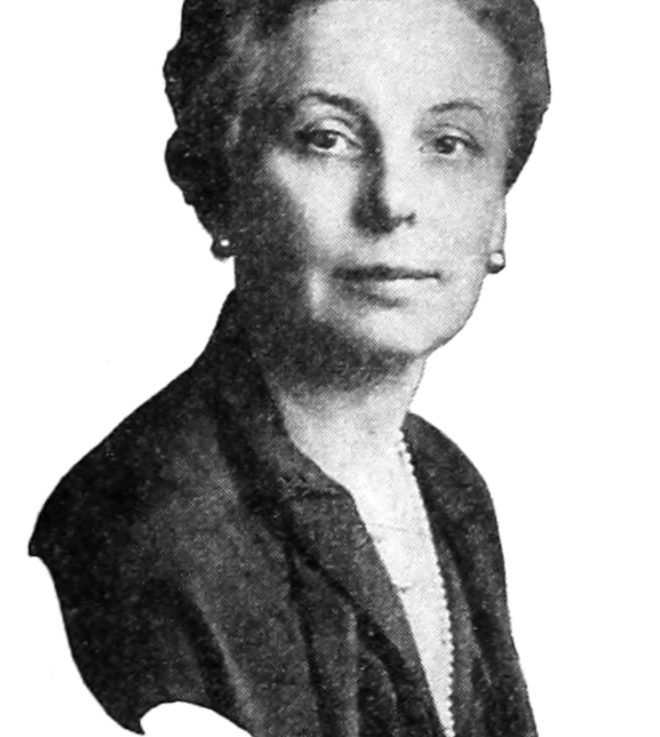 When we think of Vogue magazine today we often think of its current editor-in-chief, the formidable, Anna Wintour. While Wintour will certainly go down in history as one of Vogue‘s long-standing (since 1988) and notable editors-in-chief, there is another important Vogue editor who’s run at the magazine lasted from 1914-1952 — Edna Woolman Chase.

In this month’s post I’ll highlight excerpts by Edna Woolman Chase (1877-1957) on fashion she wore and observed during her early years from the autobiography she wrote with her daughter, Ilka Chase, Always in Vogue.

Chase witnessed the changes in silhouette that this blog chronicles, from 1880-1930, and I love that we’re able to have a primary source that comments on these distinct changes — not to mention, someone involved in the fashion industry who happens to be very opinionated!

END_OF_DOCUMENT_TOKEN_TO_BE_REPLACED 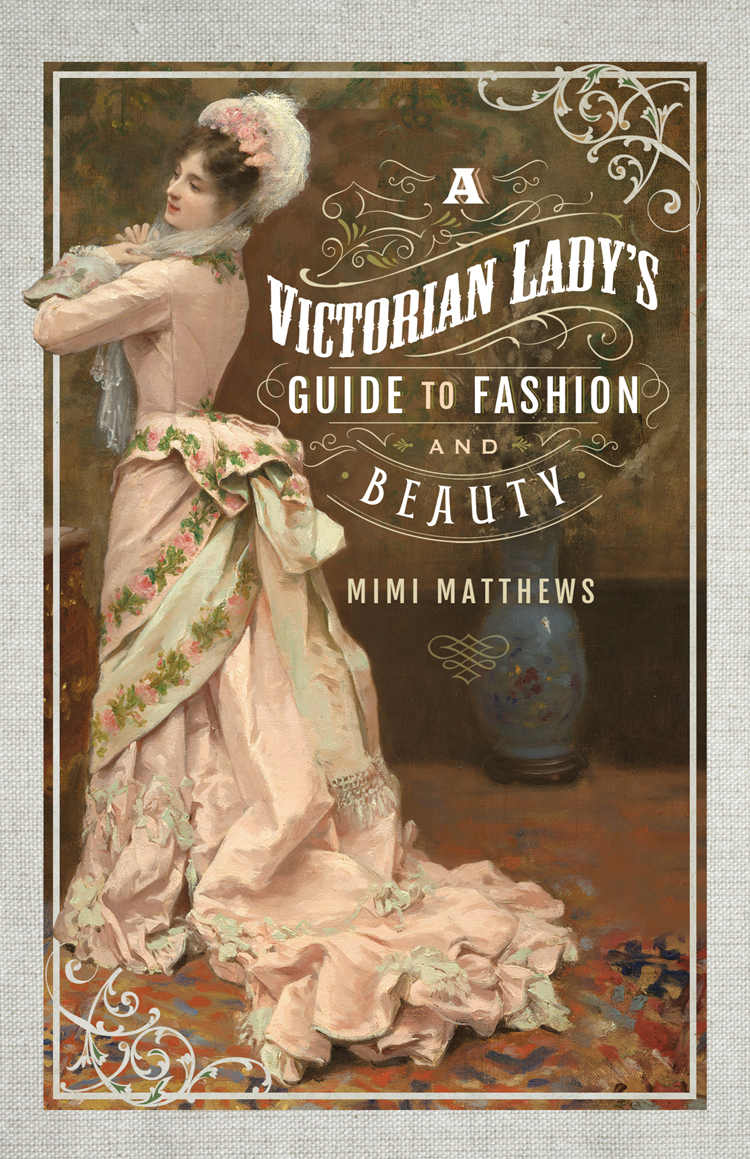 A Victorian Lady’s Guide to Fashion and Beauty by Mimi Matthews covers the course of women’s fashion and beauty changes from the 1840s through the 1890s, basically the length of Queen Victoria’s reign and influence. The book speaks to a lot of what initially drew me into researching the period of 1880-1930 in terms of the dramatic changes from restrictive, complex clothing and social customs to riding bicycles and wearing looser, linear garments without even a corset for shaping (or at least without the appearance of one).

I like the opening dichotomy of the book, “Though a young and eventually transformative queen had ascended the British throne in 1837, ordinary women of the 1840s had very little freedom of their own” (Matthews, 3).  This would largely remain true throughout the reign of Queen Victoria. Women at this time anticipated that they would need assistance just to put on their clothing (which is why the closures were typically in the back) let alone doing much of anything on their own without a chaperone.

END_OF_DOCUMENT_TOKEN_TO_BE_REPLACED 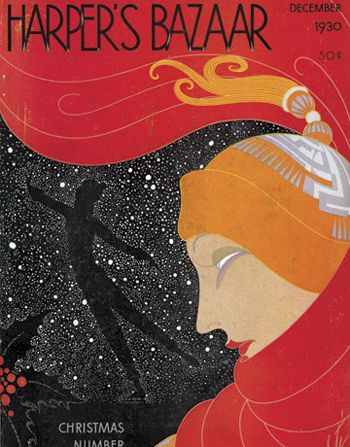 Happy Holidays to all Femme Fashion Forward readers! I decided to dedicate this post to the holiday season, and admittedly, primarily Christmas. I thought it would be interesting to compare holiday covers for Vogue and Harper’s Baza(a)z throughout the FFF timeline (1880-1930), and inevitably, the seasonal messages that were shown for December on major fashion magazine covers during this period were geared towards the celebration of Christmas if a specific holiday was mentioned.

Vogue and Harper’s Baza(a)r would also specifically publish additional “Christmas Gift” or “Christmas” editions around December.  For Vogue readers around 1911, an extra $0.25 could purchase this special gift guide that “Let Vogue do your Christmas Shopping,” as their ads proclaimed. Acting as a catalog, Vogue selected fashionable items from “the leading shops of New York,” and would deliver them to the reader as selected with no extra charge for delivery.  A foreshadowing of Amazon Prime? Not to be outdone, Harper’s Bazaar offered a similar holiday guide issue and gift ordering service.

I hope in analyzing the stylistic details of these covers from Vogue and Harper’s Bazaar (and Bazar) there is something interesting for all to take away regardless of personal holiday celebrations, in terms of insight into the art world and society at large. Overall, I think you’ll enjoy the following fashion magazine covers for the month of December!

END_OF_DOCUMENT_TOKEN_TO_BE_REPLACED

This month I am highlighting the invention of a new product in the 19th century. Have you ever used the term mackintosh to describe a coat? I’ve used the term myself and was curious about the origins.

In this case, the product is actually mackintosh fabric which would be used in constructing the coat, although today the term is often synonymous with raincoat. The fabric is rubber coated and prevents rain water from penetrating its surface. In the Journal of Education in 1907, contributor R. W. Wallace wrote,

“If Charles Goodyear – the father of the rubber industry in America – could visit one of the great rubber factories of the country to-day, he would be astounded at the phenomenal development of the industry […]. To so many uses is rubber put to-day, that the standing problem in the business world on both sides of the Atlantic is how to get enough of the raw material to meet the ever-enlarging demand for rubber goods. There are indispensable to modern life in a thousand ways, contributing to its protection and comfort in more forms than one could easily catalog.”[1]

END_OF_DOCUMENT_TOKEN_TO_BE_REPLACED 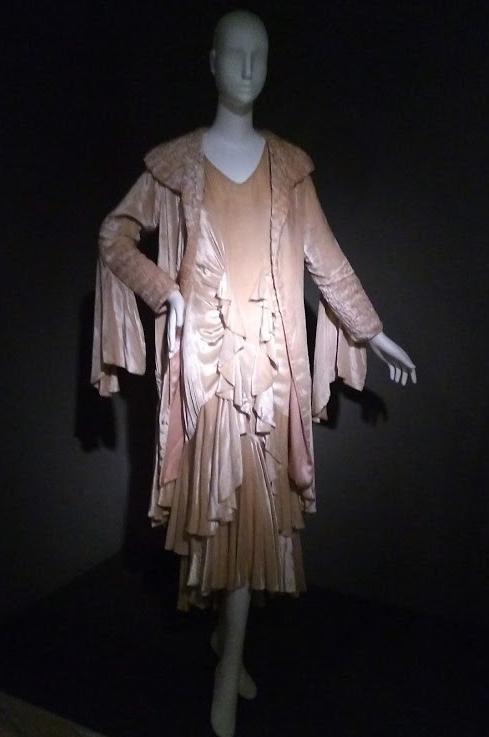 The Museum at FIT’s latest history gallery exhibit focuses on unfinished and “imperfect” works of fashion in Fashion Unraveled. This exhibit opened May 25, 2018 and will be open until November 17, 2018.

In this post I highlight some pieces that relate to the Femme Fashion Forward (1880-1930) timeline. The exhibit was broken down into 5 main themes: Mended and Altered, Unfinished, Repurposed, Behind the Seams, and Distressed and Deconstructed. I’ve chosen pieces found in each of these themes, except for Distressed and Deconstructed because most of those objects were from a later date. The exhibit challenges the idea that clothing that has been altered or changed in some way decreases in value, and argues, in many cases, this will add a historic importance to a museum’s collection and can be embraced by modern designers. This blog post does not focus on more recent interpretations of this idea, so you’ll have to head to the Museum to see those particular examples, but I think you’ll enjoy the incredible fashion pieces I’ve selected below from the 1890s and 1920s!

These stockings have been darned as the toes and heels became worn, and this was a common practice to preserve the life of such a well worn, luxury item. The Museum notes, however, that this occurred less frequently as the 20th century progressed because ready-made stockings became more available and were inexpensive enough to be treated as a disposable piece of clothing. Soon stockings would be made of a cheaper imitation silk, like rayon and nylon.

Socks and stockings have continued to be viewed as disposable today to the point where it would be highly unusual for someone to darn the holes in the toes of their socks instead of throwing them away. Mending in general is much less common in 2018. Not just for socks, but if a T-shirt or some other clothing item has a hole, many times we’ll toss it before considering repairing the piece ourselves. Some food for thought on how this shift in mind set has changed throughout the 20th century!